On November 14 and 15 2016 Swedish Prosecutors questioned Julian Assange inside the Ecuadorian Embassy in London where he was granted political asylum in 2012 to protect his Human Rights from US persecution. Sweden could have questioned him in Sweden in 2010 but they didn’t, they could have questioned him while he was under house arrest in the UK, but they didn’t, instead they pursued under advise from the UK CPS an extradition for questioning in Sweden. They could have questioned him inside the Ecuadorian Embassy but they refused until November 2016. I call this malicious prosecution. On February 5th 2016 the United Nations Working Group of Arbitrary Detention ruled that both UK and Sweden detained Julian Assange arbitrarily since December 2010. Since Sweden could have questioned him via alternative means and they didn’t their detainment of him was arbitrary. There is no price one can put on the violation of his rights but when state powers are engaged in any shape or form, then public money, collected from the Tax Payers are expended. We should all know how much the persecution of Julian Assange has cost the British Taxpayer. Let’s find out!

My Freedom of Information Request should produce some interesting results. 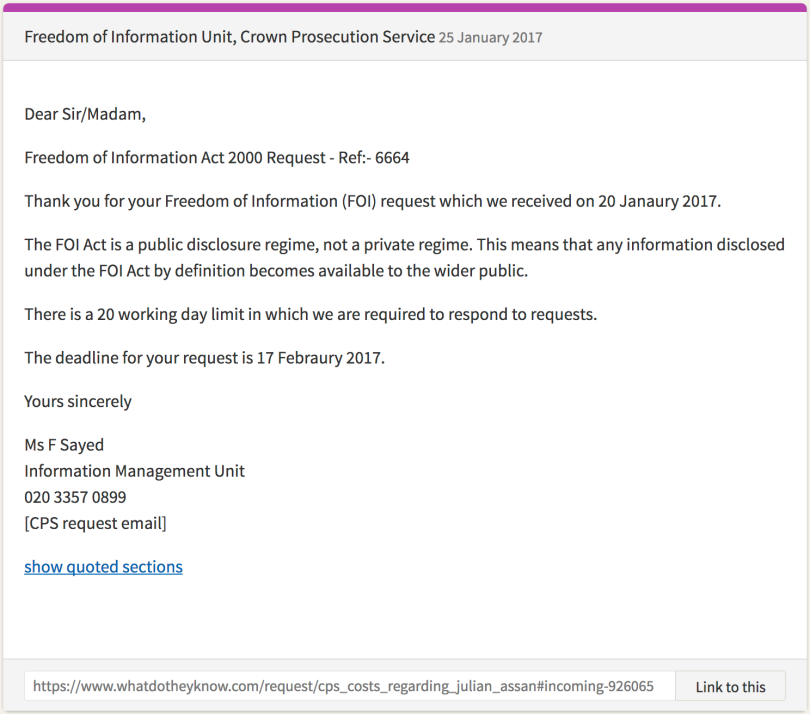 This is obviously a very partial disclosure of the costs involved, only focusing on the outside hiring fees for barristers representing the CPS.