At today’s vigil, the presence of a vehicle with its engine running for hours parked next to us pre-occupied some of our conversation and I have asked a reporter to investigate, as well as follow up on an earlier investigation into the Embassy Intruder from last summer. Will Mr Hudson investigate and enlighten us, or are we going to remain in the dark? 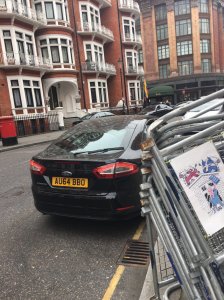 Dear Mr Hudson
In your article here: http://www.policeprofessional.com/news.aspx?id=26967  you reported that:
“Police are investigating an alleged attempted burglary at diplomatic premises in Kensington and Chelsea. The Offense was reported Monday, August 22. Detectives from Kensington and Chelsea’s CID are leading the investigation alongside colleagues from the Parliamentary and Diplomatic Protection Command. There have been no arrests and enquiries continue”.
In September 2016, chief superintendent Jane Johnson (OCU commander PaDP) confirmed that an intruder had been identified and arrested.
I filled a FOIR to find out more on the subject and whether the matter proceeded to trial but it was rejected as you can see here: https://www.whatdotheyknow.com/request/request_of_information_regarding_3
A question on the matter was asked of the London Mayor at the London Assembly, see here: http://archive.is/zzzhO and the Mayor confirmed that there has been an arrest but no more information has come into the light over this matter.
Is there an opportunity to enquire what has been the outcome as several months have gone by with no information.
On a different matter but still related to the the policing operation outside the embassy, since it became covert http://news.met.police.uk/news/covert-plan-at-ecuadorian-embassy-strengthened-after-removing-dedicated-guards-132799 in October 2015, the MetPol budget and any other operational costs have become classified and no information can be accessed. Any questions to the London Mayor are met with evasion, see here: http://archive.is/zVTzC.
Still there are resources employed outside the Ecuadorian Embassy. Today for example from 10:15 to 13:15 at least Black Ford Mondeo with two male occupants inside, registration number AU64 BB0 remained with the engine running at all times outside number 16 HansCrescent which happens to be opposite the Ecuadorian Embassy in London, No 3 Hans Crescent and in particular opposite the entrance of Landon Place which wraps the entire side of the building, where the embassy is. This is the second week in a row that the same vehicle is situated at exactly the same spot and has been observed morning, afternoon and evening. Its occupants have been at times of mixed gender. Parking control staff have been seen dispensing parking penalty notices to public utility vans and other vehicles whilst not doing so for this vehicle. At times, taking turns one of them might leave the vehicle and walk across Hans Crescent and turn into the direction of Basil Street, where another vehicle in full MetPol markings, registration number BX66 HH0 parked throughout the time observed today from 10:15 to 13:15.
What would be the justification this time for the obvious MetPol surveillance. May I just add that the vehicle made its appearance after CIA Director Pompeo declared WikiLeaks a non state hostile intelligence agency on the 13th of April https://www.csis.org/analysis/discussion-national-security-cia-director-mike-pompeo/?block1 and US DOJ’s Attorney General Sessions stating that they are preparing charges against Julian Assange (20th of April).
Again, is there an opportunity to enquire as to the justification the MetPol offers for this particular expenditure? That part of Hans Crescent is not a location that gathers many people. Knightsbridge station with its traffic is on the other side of the road which is pedestrianised. If the police is concerned for the safety of people in a busy spot, why aren’t they placing their vehicle on the pedestrian area outside Harrods as they have done on previous numerous occasions, closer where people congregate to enjoy the occasional baskers, entertainers, why place their vehicles in the quiet side of Hans Crescent opposite the Ecuadorian embassy and on Basil street, and why do they keep at least one of their vehicles unmarked and their officers without uniform? Of cource one cannot be entirely sure about the function of these people in the Black Mondeo but their presence is certainly very bizarre.
I attach a photo of the vehicle that I mention here and I would be very grateful for any information on the matter. I hope you will find matter of interest and investigate further.
Kind regards
Mrs Emmy Butlin
JADC (Julian Assange Defence Committee)
Grassroots solidarity for WikiLeaks’ Editor Julian Assange
(We are not connected or represent WikiLeaks/Julian Assange in any way)

#FreeAssangeNow Stop the persecution of #WikiLeaks editor by US DOJ, CIA https://t.co/DDRNkihUDg pic.twitter.com/fvitGSDEhH

No reply from Nick Hudson or his editor so far, let’s give them some time. In the meanwhile from today’s vigil I can report that the two vehicles (the marked and the unmarked) are nowhere to be seen. It is Bank Holiday Monday, May Day Public Holiday. I guess the MetPol is quite busy elsewhere or did not want to pay the time and a half police overtime rates. Who knows! keeping our eyes open. 🙂

No news from Mr Hudson, I might give him a call, check if he got my e-mail: http://archive.is/RECcm