During June 2012 I received the most alarming news from Mark,  the Forum’s owner. He believed his phone was being tapped, he said he thought his car was being followed and his (adult) children were being photographed. My concern was dual. First about his safety but also, was Mark being truthful, he certainly sounded convincing, or was it some kind of attention seeking exercise ? Many a time I had held my breath before, over ddos attacks that turned out to be not ddos attacks and forum ‘enemies’ / adversaries that were of his own creation.

In July 2012 he started being vocal about tensions with WL. He said he resented being called a drama queen although he would not explain further. It became apparent that he was no longer able to post at the WikiLeaks Facebook Page. This meant he could no longer promote the forum’s Translation Project there neither could he invite new members to join the forum. I had no idea what had passed. He also disagreed strongly with the WikiLeaks release  “The Syria Files”. He believed WL was taking sides in the Syria conflict, undermining Assad’s government. While he was on a week’s holiday abroad I continued using the forum’s twitter account, adding  links from the forum with WL articles, into the #WikiLeaks hashtag.

On the 19th of July while I was tweeting from the forum’s account and having several tabs open, I noticed that every time I tweeted the WikiLeaks FB page was getting updates, upon checking I nearly fell off my chair. My WLForum tweets full of hashtags were appearing as posts in the WikiLeaks Facebook Page which at the time had more than 1.5 million ‘Likes’. I simply panicked. At that point I did not even know that it was possible to link Twitter and Facebook, one feeding the other. Apart from the embarrassment of filling 1.5 million FB Feeds with ugly hashtags the question remained that neither Mark, nor myself had any authority to post there, so why was this happening? 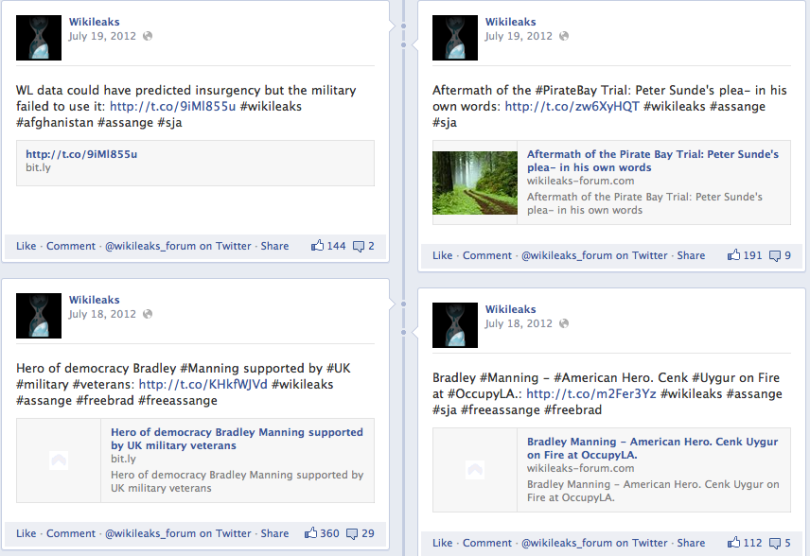 At 10:27 I contacted Mark via message and after a few urgent communication exchanges and failed guided attempts to fix the problem from my part, the issue was finally resolved by 13:30 and I could once again breathe a sigh a relief.

Who would have done such a thing, why and how? Despite my anxiety on the matter once again I found myself thinking “best I don’t know” but did not like this one bit.

Upon his return from his holiday his dissatisfaction/anger over the release of the Syria Files became evident and from then onwards he embarked on an accelerated disowning of his support for WikiLeaks and in particular JA, who he would soon be calling “An agent of the West’ aiming to destabilise the Middle East and help establish Muslim Brotherhood regimes there. As he vented his anger by attacking supporters in twitter under the disguise of the Forum’s Twitter Account I felt a tense unease that this was a crisis beyond anything I imagined.

In the meanwhile, at the FB Staff Group Room a different kind of post by another Admin:

tilted my mind to a direction that I did not want to face, the possibility that further than Mark’s new animosity toward WL/JA fuelled by spite for losing control of the FB page, there might be a different game at play here that I did not dare consider.

You can find the article here: