In the many question MArk s formed in my head about my time at the website wikileaks-forum.com, surely the roundest and boldest extends to the relationship and co-operation between Mark (at the time aged 50) and Siggi (at the time aged 19). I mention their ages because it was an indication that their relationship was unequal from the start.

The latter was not someone I was acquainted with at the forum or outside. By the time I became a mod (31.10.2011) Siggi had already left. But, Mark kept saying things about him.

Is Mark lying about Siggi?

The first thing he told me in Autumn 2011 was that they set up the forum together. He also said the same thing about the shop. He said that Siggi had taken money from the shop’s account but WL refused to prosecute for financial embezzlement despite Mark’s encouragement to do so. He had repeatedly challenged them ‘why don’t you prosecute him?” He also said that despite his young age WL had given him a lot of responsibility at the forum. Under WL instruction Siggy had deleted an entire forum Board, the UFO/Paranoid rants board (for which he had a soft spot). He could never forgive Siggi and WL for “censoring the UFO/Paranoid posts”.

Sometime later  he told me that WL had finally prosecuted Siggi for financial embezzlement. I could not help but detect a certain satisfaction on his part and he, in time, proceeded to re-instate a UFO/Paranoid Board. Considering what he was saying to me, I concluded that he could not have thought very highly of the young man. One minute he was presenting him to me as the WL forum representative.  Mark’s dealings with him gave the forum legitimacy, next thing he was not very respectful towards him.  In particular  he said Siggy had a hacking career in his country, Iceland, bringing forward a few examples that I thought at the time he had better have kept to himself. It was a betrayal to Siggi to be sharing such secrets with someone like me who he knew for only about 5 minutes. I have no idea whether any of Mark’s claims about Siggi were true. But I was left with the impression that there was a lot of tug of war between them.

Is Mark lying about supporting WikiLeaks?

I left the forum (Aug/Sep 2012) and in Nov 2012 I came across an interview by Siggi as part of a BBC Radio programme were he mentioned his forum name of Q. I nearly fell off my chair, what was he doing giving interviews?  By that time the forum had already comfortably established and documented their enstrangement from WikiLeaks/Julian Assange that had started in Summer 2012. Every anti-WikiLeaks platform had been invited on board, the Objectiviser, Wikiwatcher, several PGPBoard staff, DDB’s OpenLeaks. The Admins in-between the hundreds of articles about WikiLeaks that they harvested from google and submitted to the forum, they also posted threads, questioning and criticising every single WL/JA action, without exception. The only thing they loved was the ‘idea of WikiLeaks’ without WikiLeaks, presenting more and more themselves as the disillusioned supporters forever the ‘victims of attacks by WL cultists’ all fictional, abusing people in twitter, if one as much as expressed an opinion different to them. One could easily see that the forum, now empty of  any real support for WikiLeaks had been truly turned into a vehicle of hypocrisy. If they changed the name to wikiwatcher, they would be more truthful.

What was the balance of power between Mark & Siggy at the Forum?

Then in January 2013 a forum post was put up mentioning Siggi as a proof of WL’s involvement at the forum. Then on July 2013 a more extended version of the same post appeared again at the forum. During that Summer Siggi came out in the press with a series of articles about his role within WL and his role in co-operating with the FBI and passing them information about WL. You can find a summary here: http://www.cabledrum.net/news/q.

With all the above in mind and the sudden publicity Siggi brought upon himself, on the 5th of July I found myself discussing Mark & Siggy’s relationship with a couple of other people, sharing opinions. Finally I tweeted:

Of course this alluded to the fact that a) there was an unequal relationship between them. One person, a mature man with three grown up children of his own, an internet media expert (SEO, article submission systems) a young person’s football coach and carer of disabled people. The other, a young man of 19 with lots of internet experience but hardly any life experience. In my communications with Mark he sometimes described Q as the one making the decisions (as WL representative) ie he was the boss (e.g. taking the UFO board down) but in other times he was described as simply someone not in control of himself or his life…hacking, thieving, in trouble with the law, and how on earth WL gave him such responsibility. So who called the shots, who was giving instructions, Mark or Siggy at the forum and  in their relationship. Who fooled the other? Was it the young hacker taking the UFO board down? or had Mark fooled Siggy and kicked him out of the forum? From my own experience I would say that Mark remained in control. From my own experience I would say that sometimes people make dramatic decisions to escape such control.

I made a reference to the conclusion of the embezzlement case as a landmark when some of the details of their relationship might become public and therefore reveal its nature. I also half believed that Mark may become a witness in this case. In his narrative, he placed himself right in the middle of it as a reliable witness. He knew so much about it and told me he had set the shop together with Siggy and spoke with such confidence on the matter and had repeatedly challenged WL to prosecute according to his own assertions. But, none of it was known widely. I do not know if anything that I was told was true.

The First Lie and its dissemination

But my Tweet was seen by Mark and his team and with no time to lose at all the WLForum twitter account as well as all the known individual twitter accounts of the current admins at the forum (WLF staff they call themselves) were all  claiming that I had falsely accused Mark of Financial Embezzlement. The tweets were flying around like poisoned bullets dripping with the manufactured lie.

My tweet contained no accusation against any person http://archive.is/a2ZMa.

On the 7th of July 2013 a lengthy post was placed by Z (Mark) in the forum http://archive.is/pXvE0 saying the same lie that I:

‘had publicly accused a Forum staff member of embezzlement, together with Sigudur Thordarsson’

It also included several other screenshots of tweets I made, misrepresenting them, giving them always a certain twist to serve their narrative. This post was ‘Announced’ to all members. This means that a copy was e-mailed to over 15,000 individual e-mail addresses & went directly into their inbox for them to read without having to view them on the wikileaks-forum.com website.

On the next day, the 8th of July 2013 a second post was again ‘announced’ by Z to all members: http://archive.is/7ijM3 stating amongst other:

‘On Monday 8th of July 2013, the accused staff member launched criminal proceedings against @greekemmy for defamation of character and slander with the London Metropolitan Police MPS Crime Recording and Investigation Bureau’

The 2nd post was also translated into german & posted on the German Language Board: http://archive.is/2wdBz

The two forum posts were also put in the support-julian-assange.com blog by Soul Assassin, the blog’s owner (Mark), deleted now but kept for posterity in paper copy and now photo: 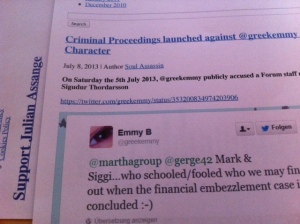 If people might be wondering why these posts were deleted, may I suggest they look at the Author Soul Assassin, who also has a  public Deviant Art Account archived here: http://archive.is/f2mbM

Soul Assassin was also Mark’s jabber identity that he used in all his communications with me, here is one:

These posts were also shared as links through all the inauthentic WikiLeaks related Facebook Pages  that he controls with the assistance of the Forum’s Admin staff, reaching over 180,000 Facebook NewsFeeds and they were shared several times and promoted there. I will save the screenshots for an update to this post.

But defamation is not a a criminal offence in the UK and as such it is not a matter that will be investigated by the UK police. Criminal defamation has been abolished in the UK since 12 January 2010  http://www.contactlaw.co.uk/criminal-defamation.html Defamation is a Civil matter where an individual raises a private lawsuit directly with the courts, that is to say the police is not involved. http://www.legalmatch.com/law-library/article/civil-tort-law.html

So what has Mark actually done? how can he claim that ‘Criminal Proceedings launched against @greekemmy for defamation of Character’ with the MET when defamation is not a criminal offence and it is not a matter for the police. He claims to have sought legal advise on the matter. Hasn’t his solicitor told him this?

Of course my own solicitor to whom I turned for independent and legal advise, having looked at this tweet and consulted the law suggested to me that it is neither defamatory nor a matter for the police. I also shown them Mark’s forum/ s-j-a posts, the forum’s tweets and all the Facebook posts in the WikiLeaks related pages he controls. I was advised that I may wish to take myself steps to protect my own reputation by raising a private lawsuit against him, or at least approach Twitter and Facebook with a complaint. I did neither at the time not wanting to spend my money and time in this manner.  I had quietly rebuffed the claims he was making and left it to that. I turned down  offers of help from true Twitter friends  (to whom I am for ever grateful for the moral support <3). I did not want the forum to attract more attention at a time close to the Australian election when Mark could just harvest it to spread more anti-WL messages. I believe my approach was correct at the time but it also emboldened him and his team of admins resulting on more cyber bullying. (I have analysed an example in another post).

And here is a perfect example of how far Mark is prepared to go to manufacture and propagate a lie, making it a tool for intimidation, manipulation and bullying towards 1 single individual. He is even prepared to mock the law & waste police time. Let it be known that it is the same person who shaped my initial in jabber with heart emoticons. Oh he loved his staff so much when they slaved away submitting links to his SOE submission system…ie his forum and blog websites 🙂 Whose next on the list ?