19 mins ago at 2:47am an unknown man scaled the side wall+window of the Ecuadorian embassy in London; fled after being caught by security.

I wrote to my representative London Assembly Members:

On February 2016 the United Nations Working Group of Arbitrary Detention ruled that Julian Assange the editor of WikiLeaks should be released and compensated by the UK and Sweden. Neither countries recognise the political asylum that Ecuador has granted Julian Assange for the persecution and threat to his life, work and human rights by the actions of United States government. The US government investigations of a publisher and the work of his staff at WikiLeaks for the last 6 years in a Grand Jury investigation in Washington Virginia for Espionage, Conspiracy to commit espionage, The theft or conversion of property belonging to the United States government, Violation of the Computer Fraud and Abuse Act, (general) Conspiracy, sends chills to the publishing and journalistic world. The public threats to his life the last 6 years and the persecution, of WikiLeaks have been broadcasted and met with impunity despite Human Rights organisations condemning them.

The UK refuses to allow safe passage to Ecuador de facto trapping him in the Ecuadorian Embassy in London Knightsbridge for 4 long years. Despite his deterioration of health and urgent need for medical attention unable to be offered to him within the confines of the Embassy, the UK government persists that they will arrest him the moment he steps outside the embassy to visit a hospital. The Metropolitan Police has spent millions of tax payers money in a 24/7 police surveillance of Julian Assange at the embassy to support his immediate arrest, first with overt presence of uniformed police surrounding the embassy and a covert surveillance operation and since October 2015 having scaled down the overt presence they declared to have increased the covert operation.

I find the whole matter distasteful and a blatant disregard for Human Rights Law, the UK’s violation of International obligations all paid for by London Taxpayers who have never been asked their opinion on the matter.

The new London Mayor Sadiq Khan since his election is silent on the matter. Does he condone such spending by the public purse under his control that violates the Human Rights he has pledged to uphold in his public office and as a human rights lawyer?

This morning we woke up to the news that :

“…at 2:47am an unknown man scaled the side wall+window of the Ecuadorian embassy in London; fled after being caught by security”

And my question is, what is Metropolitan Police doing in its surveillance 24/7 of Assange in the Embassy? Having stood outside the Ecuadorian Embassy for hundreds of hours in solidarity vigil over the last four years I have stood witness to the millions of pounds that have been spent in surveilling it and laying a seige upon it to create a threat of arrest onto Julian Assange as well as monitor and record the diplomatic work at the embassy as well as the WikiLeaks work conducted there by Julian Assange. When a matter of real threat to someone’s safety and security arises, like potential burglary, potential attempt onto Julian Assange’s life not to mention the threat on a diplomatic premises, what does the Metropolitan police do?

Considering the 24/7 surveillance operation they conduct together with other parts of government controlled security and intelligence services how is it that not a single word has been mentioned by Sir Bernard Hogan Howe who happily spends our Tax payers money on such operation? What is the Mayor have to say with such a hypocrisy going on with the Embassy Assange surveillance or are we Londoners not to know what is going on in our own back yard on the name of a frankly ludicrous claim of ‘national security’ or upsetting the diplomatic relations with an allied country like the one of the United States. Under Sir Bernard Hogan Howe’s watch these things have been going on and what does he have to say on the matter? Is the UK state apparatus complicit in undermining Julian Assange’s and the Ecuadorian Embassy staff safety, just like the UK political leadership is arbitrarily detaining him to the detriment of his health in blatant violation of his human rights?

Not in our name! I appeal to you, our elected London Assembly members to take action that the MetPol actions are scrutinised and that the London Mayor takes a serious interest in both the budget that is being entrusted with but also what the MetPol is doing to Julian Assange safety and security under Sadiq Khan’s guardianship.

I thank you in advance for your time 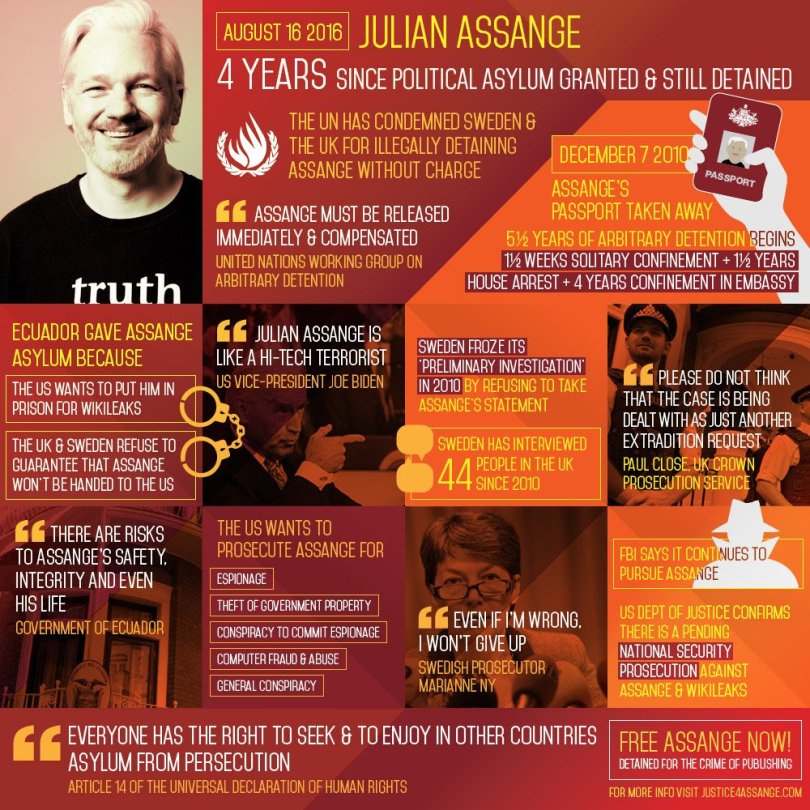